ARi has developed proprietary operating modes to improve SMB performance, including Coupled Loop SMB, where multiple components are separated with high purity and recovery. The use of fractal technology in ARi’s chromatography systems ensures reliable scale-up and maximizes operating efficiency.

What is simulated moving bed chromatography?

In the following discussion, true moving bed chromatography (a very difficult process to put into practice) will first be described, and from this, the more practical (SMB) chromatography process can be derived and understood.

First imagine a resin filled column formed as a toroid: 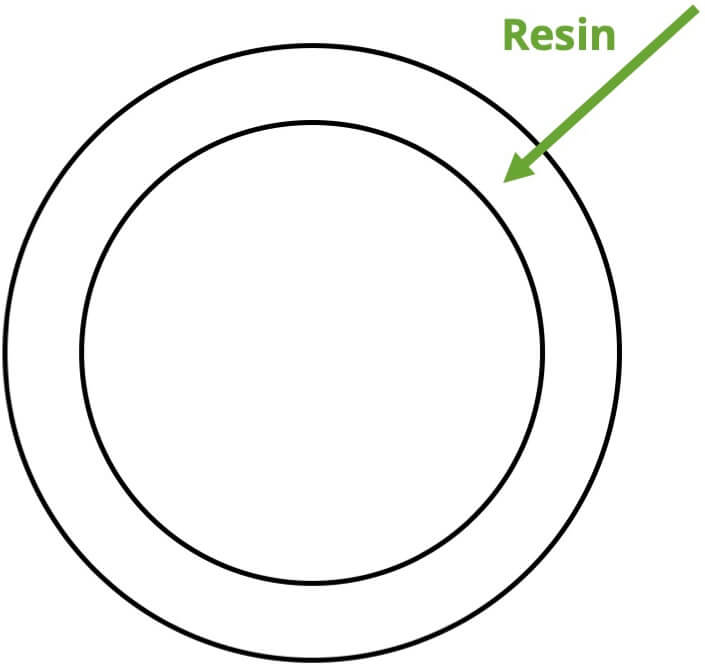 Toroid is filled with a chromatographic resin.

Now imagine a rapid, continuous flow of water (eluent) in one direction inside the loop: 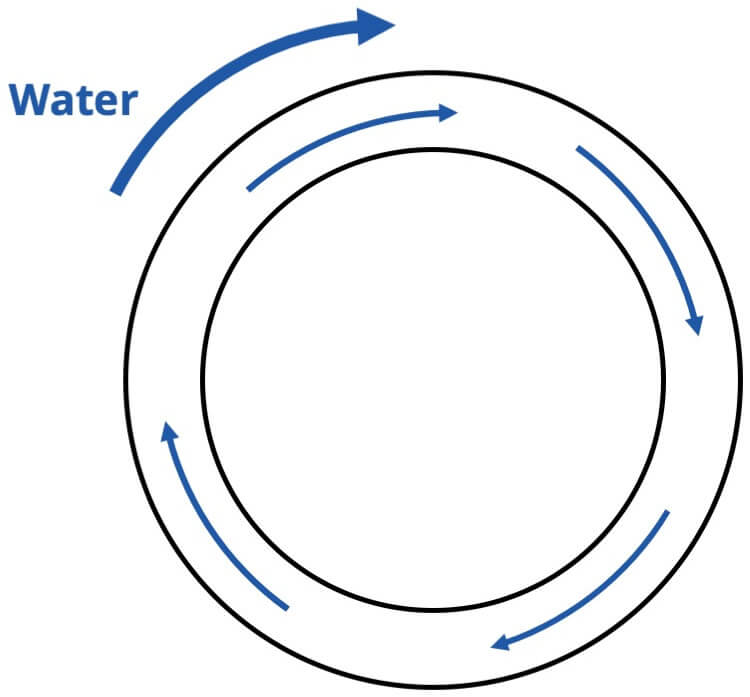 Water circulating rapidly in one direction inside the loop.

Now imagine that the chromatographic resin contained in the toroid is rapidly circulating in the loop in the opposite direction of the water circulation: 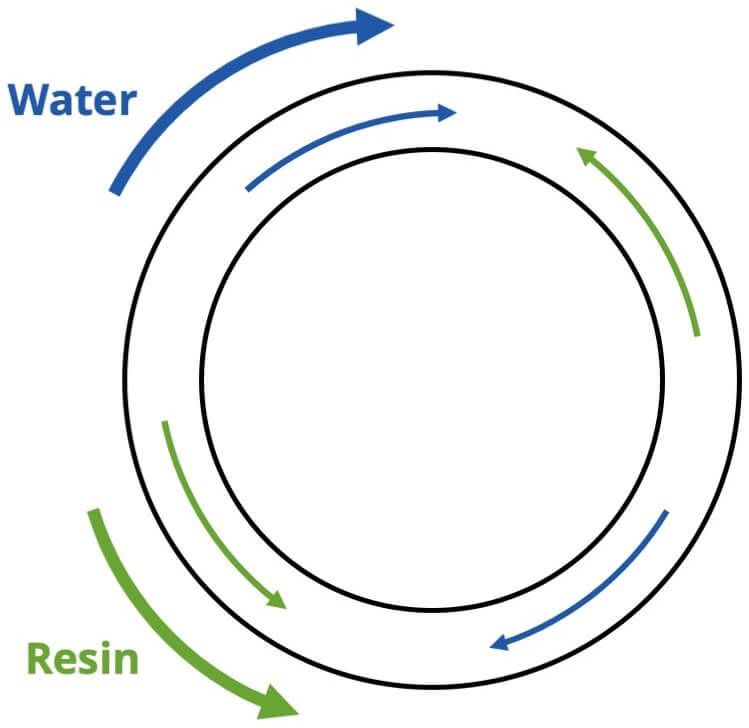 Recall that this process is, for the time being, imaginary, so it is not necessary to explain how the two opposing flows of water and resin are enabled. Setting up these two opposing internal flows results in a key characteristic of a true moving bed. If a binary mixture to be separated is added continuously at one point of the loop, the component more readily adsorbed by the resin will tend to move with the resin and the component less readily adsorbed will move with the water. If the two opposing internal flows are balanced carefully, the two components can be continuously separated and recovered.

More highly adsorbed components tend to move with the resin and can be taken out of a valve downstream from the resin flow direction. 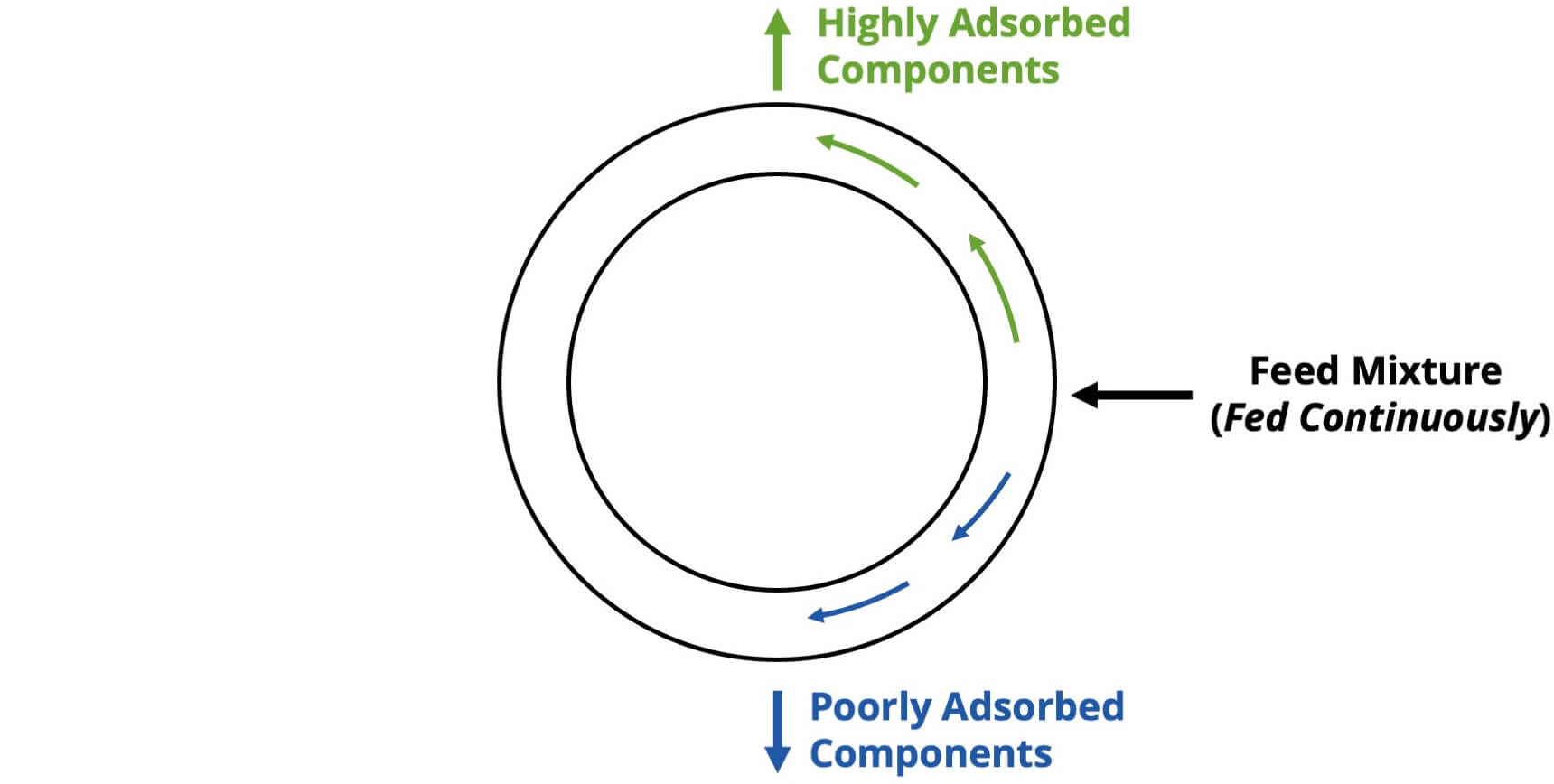 Poorly adsorbed components move with the water and can be taken out of a valve downstream of the water flow direction.

True moving bed is a type of continuous chromatography. The benefits observed, in addition to continuous operation, are less eluent and less resin than used for batch chromatography. Eluent must also be added continuously to the system, so the overall process looks like the following figure. Note that the highly adsorbed component is commonly called "extract" and the less adsorbed component is called "raffinate." 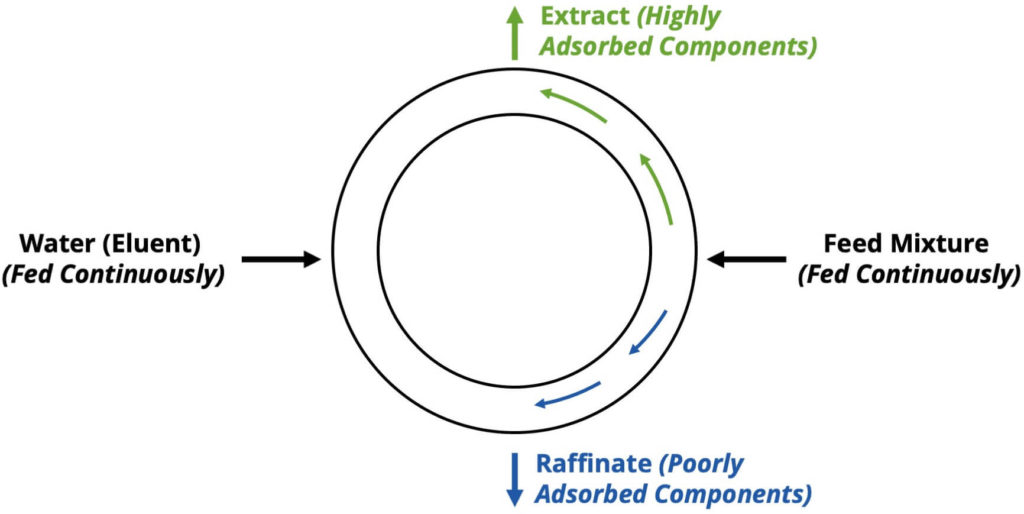 Unlike batch chromatography, which can separate many components from a mixture, the moving bed method is a binary separation technique - the material which moves with the circulating water and the material which moves with the circulating resin. There are some unusual characteristics of moving bed technology which cannot be accomplished with batch chromatography. For example, there is a useful path length effect. If a batch system has a column with a 10-foot path length, the entering mixture will interact with a path of 10 feet of resin. 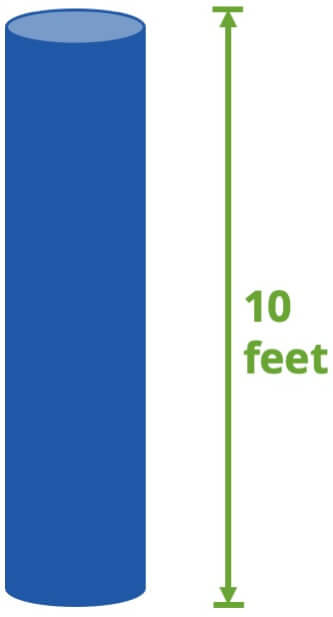 A batch chromatography process with a 10-foot path length. The material passing through the column will be subjected to interaction with 10 feet of resin.

A longer path length will generally improve the chromatographic separation, as additional equilibrium steps, or "theoretical plates," will be available. With moving bed technology, the path length of resin which interacts with the feed mixture can be increased beyond the length of the resin in the system by increasing the internal flow rate of the resin. It may at first appear that this will just move the highly adsorbed component more quickly to its outlet valve, but to avoid this, the water flow in the opposite direction is also increased. This tends to move components back in the other direction.

Increasing internal flows in both directions means the entering mixture will interact with a much longer path of resin before exiting. So instead of being constrained to a path length as observed with batch chromatography, the moving bed system can increase path length without increasing the amount of resin used. This is one reason why moving bed technology can use significantly less resin than a batch system. The resin path can be increased in this way until constraints such as pressure drop or adsorption kinetics are reached. An example of increasing path length in this manner is shown in the following figure:

Another unusual advantage of moving bed technology is control of the internal inventory. At ARi we refer to this as control of "differential inventory". This means that with a moving bed, it is possible to operate the system like a storeroom, so that a targeted imbalance of components internal to the system can be realized prior to operating in steady state. This can be understood by referring to a storeroom with an initial imbalance between components, so in ≠ out for one component. This will result in a differential inventory of one component forming in the storeroom.

Subsequently, if the storeroom is operated in a balanced condition such that in = out, then the previously stored inventory results in the component remaining in the storeroom longer than other components, since the inventory in the storeroom must be continuously displaced. With respect to moving bed technology, this results in some dramatic effects not observed with batch chromatography. For example, a particular component entering with the feed mixture can be differentially inventoried, so it is subjected to a longer residence time in the system than other components.

Equilibrated, balanced storeroom operation, but with a buffer of hammers due to the initial short-term unbalanced operation. An entering hammer will have a longer residence time in the storeroom before exiting since it must wait in line for the inventory to be displaced.

This can be useful if the longer residence time will be helpful to separate a particular component. This is a method that can be used to subject a component to a longer resin path than other components. Note how different this is from batch chromatography. As one example of the possibilities, at constant feed and eluent rate, a particular component can be inventoried in such a manner that it exits at a higher or lower target % dissolved solid.

Simulated moving bed (SMB) technology is used to implement a very close approximation of true moving bed chromatography. SMB exhibits the same valuable characteristics of the true moving bed concept. The following discussion will develop the SMB concept based on the previous discussion.

When encountering SMB in the literature, often a set of cells or columns is illustrated: 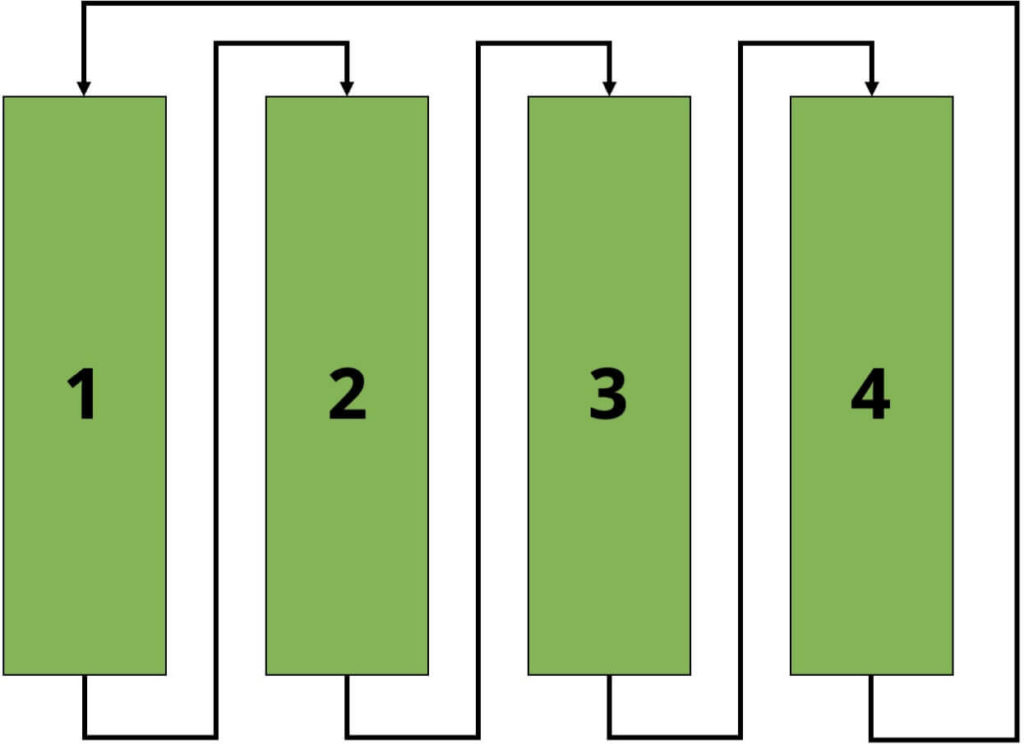 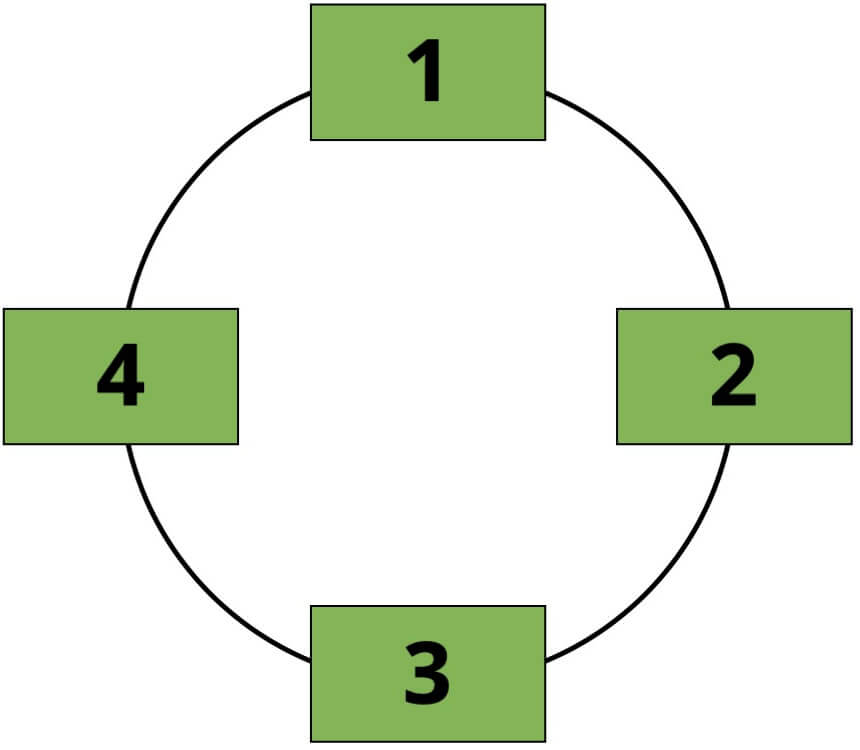 When the SMB system is drawn like this, it is easy to see how we can start with a continuous rapid circulation of liquid flow in one direction - the same as in the true moving bed discussion. This flow is accomplished with circulation pumps between cells: 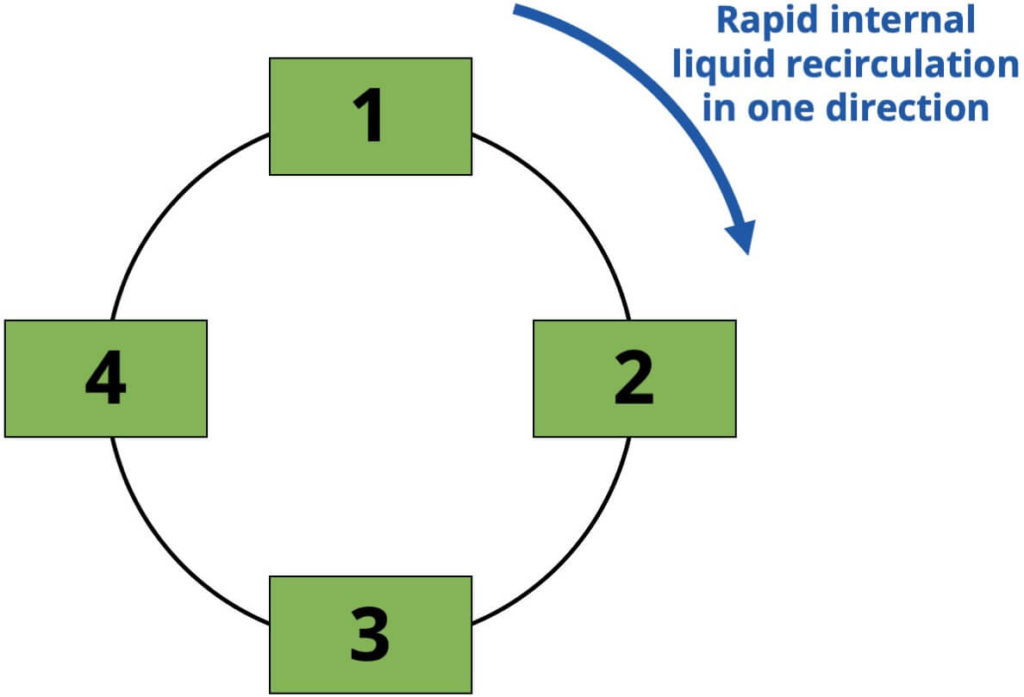 However, the resin is residing in cells and is therefore stationary. Unlike the true moving bed, we have no way to move the resin in a direction opposite to the circulating liquid. If a feed mixture is added at a point between cells, everything will simply move in the direction of the liquid flow. This is not what we want. The secret of SMB operation is that the resin movement can be simulated in the direction opposite to the internal circulation by occasionally switching the feed valve in the same direction as the liquid flow. The other 3 valves - eluent, extract, and raffinate – must also move in this manner. With respect to the figures below, for a person standing in the frame of reference of the feed mixture valve (not aware that it is moving around the loop but thinking it is stationary and the loop itself is moving), it would appear that the circulation liquid is moving ahead while the resin is moving back. This is the same as a true moving bed. 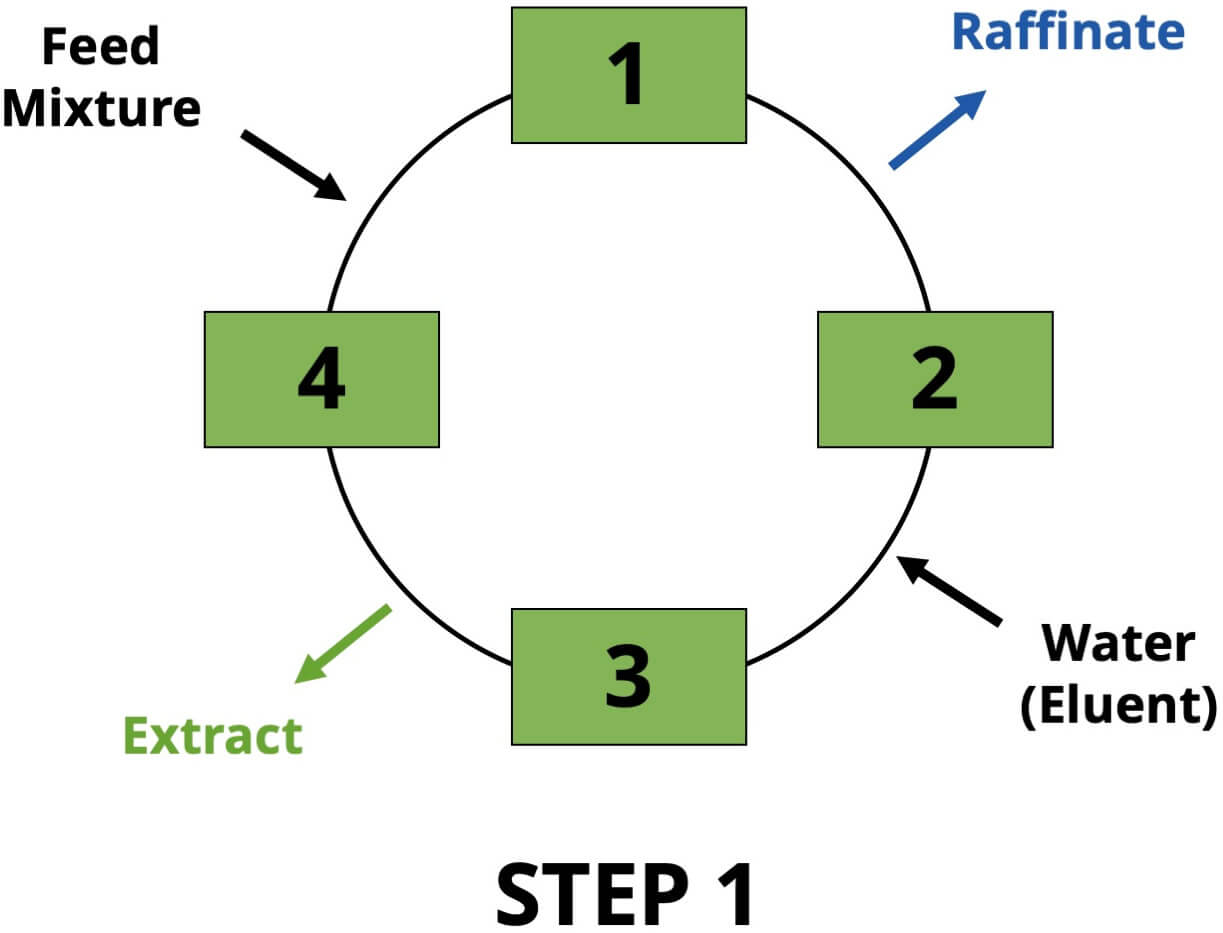 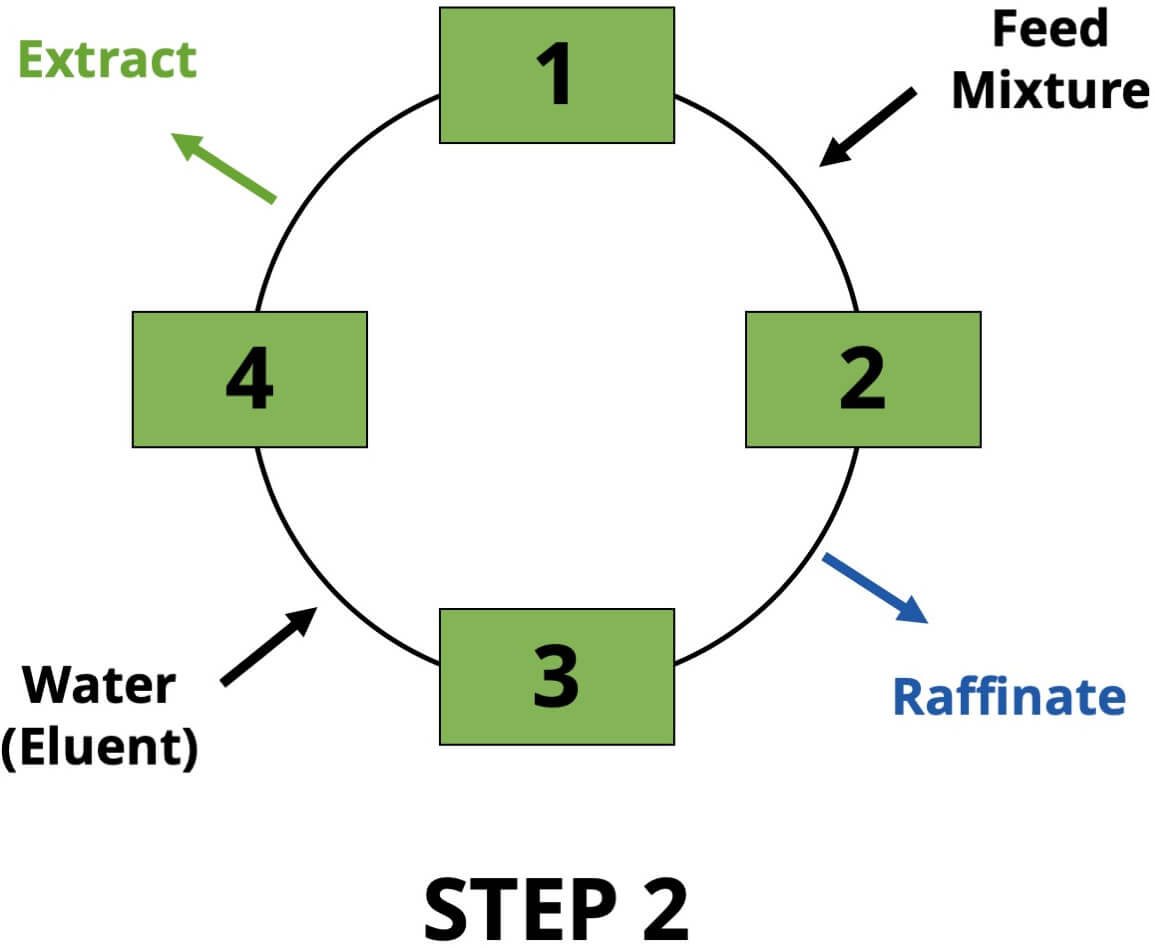 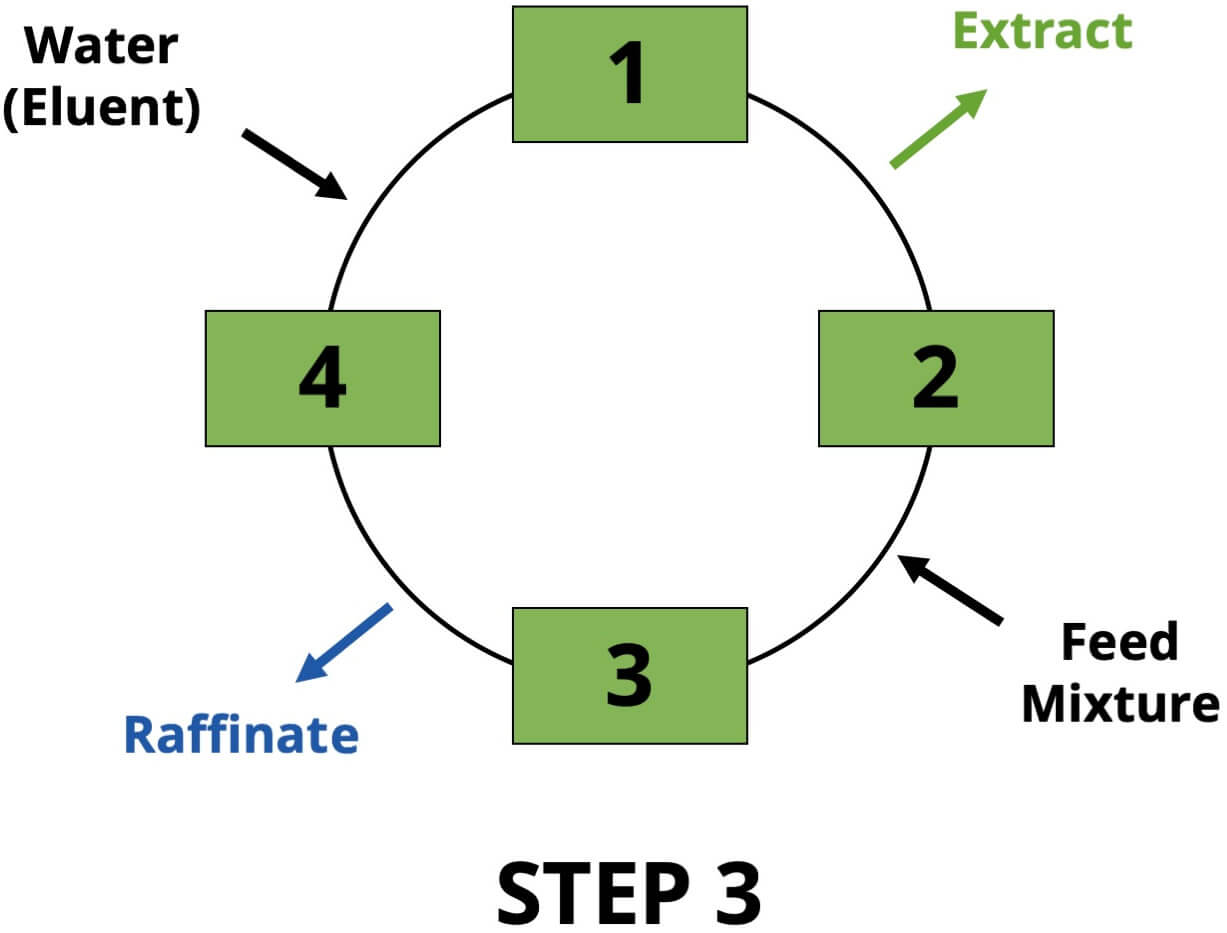 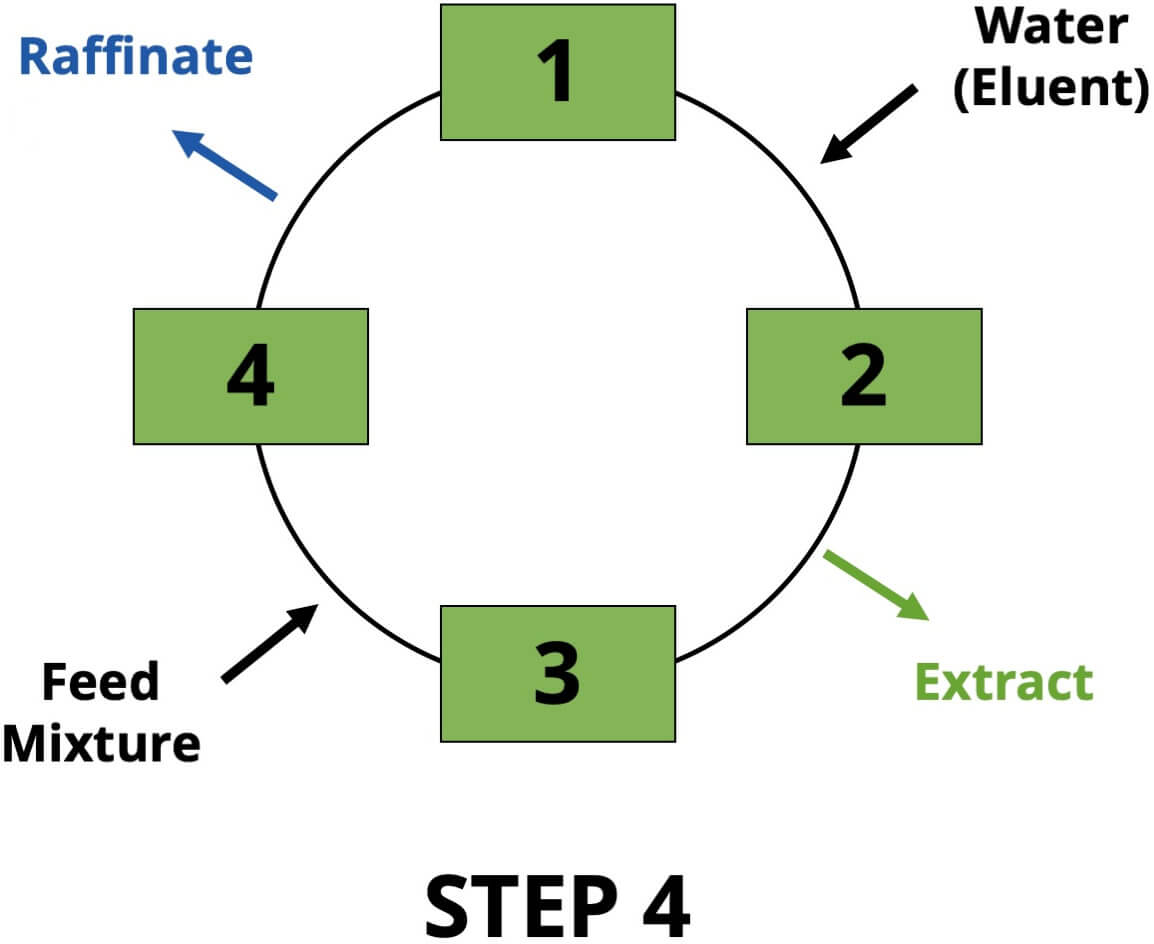 Note, therefore, that for SMB operation the switching of valve locations takes the place of the internal resin flow.

You can best understand how a true moving bed is simulated by placing yourself in the frame of reference of the rotating valves, and by assuming that the presently working valves (feed, water, extract or raffinate) for a given material are always in the same location in space while the rest of the SMB equipment - cells etc. - moves relative to you. In other words, the resin appears to move counter-current to the internal liquid flow because of your frame of reference.

SMB operation is not a perfect simulation of true moving bed operation. The reason is that the resin movement simulation (by valve switching) is not accomplished in a continuous manner around the loop, but rather, jumps intermittently between cells. This means that as more cells are added to an SMB, a true moving bed is more closely simulated. An infinite number of cells would be needed for an exact simulation. Fortunately, 4 to 12 cells are typically enough to obtain most of the benefits of a true moving bed.

ARi’s SMB technology is in general more sophisticated than the standard SMB described above. ARi has patented a number of SMB concepts, including Time Variable SMB, where the various in/out and circulation flows are varied as a function of time, and Coupled Loop SMB, where multiple components are separated with high purity and recovery. These variations on standard SMB provide additional benefits depending upon the process application goals and requirements. In addition, ARi uses patented fractal technology to further enhance the efficiency of its industrial chromatography systems.